Yoga capital of the world - Rishikesh - the journey to another dimension.

Rishikesh post, take two. My initial post transgressed into more of a personal account of my departure from London and my transition to life in India, so I wanted to write a more Rishikesh-specific post, about a place that deserves it greatly.

Where to begin though? Perhaps a fitting place to start would be a dissection of it’s name, Rishikesh, which will provide the perfect spiritual entry point. So, rishi means sage, or prophetic seer, and refers to the holy men, babas, living in caves in the foothills of the Himalayas.

These gifted ‘seers’ were blessed with the divine revelations that were to become the Vedas, India’s most holy ancient Hindu scriptures. The area itself has further significance in being destined as the place for Lord Rama, ninth apparition of Lord Vishnu, to remain, in exile, for the murder of evil demon, Ravana, in a battle over Rama’s wife.  Rama and his brother Laxman, crossed the mighty Ganga on a bridge made of rope, and now, hundreds of years later, these significant spots on the river are marked by the city’s two famous bridges, Ram Jhula and Laxman Jhula, narrow metal suspension bridges, stretching across the watery rapids below.

The city is known as the ‘Gateway to the Himalayas’ and paves the way to further religiously important locations, such as Kedarnath and Gangotri.  Thousands of pilgrims flock to this spiritual hub of ancient temples, to pay penance and absolve their sins. Moksha seeking travellers, come here to find their slice of kaivalaya, to experience ananadamaya, a blissful state of nirvana.  From this brief history, the vibe of this special place should be coming clear.

If Hindu tales don’t paint the picture for you, simply consider witnessing the turquoise waters of Mother Ganga, flowing steadily; icy glacial waters, at the start of their journey down through the rest of India.  The holy river the foreground for the mountainous backdrop of never ending hills.  Being up close to the mighty river and Himalayan mountain range, the energy is palpable and different from any other place I have yet to experience.

A scientific approach may put this down to the heavy presence of negative ions, produced by this flowing water and hilly terrain.  Negative ions cling to positive ions, accumulated by electromagnetic radiation from technology, WiFi, smartphones.  Negative ions neutralise these, having a positive effect on the body, most evident after walks in nature, through the forest or by the sea.

For this very reason, Himalayan salt lamps have made their way across the globe, a popular modern take on the ancient Ayurvedic healing powers of this pink, rock salt.  If a soccer-ball sized lump of this salt, placed in the corner of a bedroom, can give health-boosting energetic benefits, imagine what being next to the whole damn mountain range can do.  I’ll say it again, the energy here is strong!  Shiva lives here, in the mountains, an omniscient presence all around, and the Ganga flows with the powerful energy of Kali, the complex consort of my divine, sky-blue, God.

Unsurprisingly this place has become a spiritual haven of yogic and meditative practices, even given the impressive moniker of ‘Yoga Capital of the World’.  That it certainly was, with more yoga schools than one can possibly imagine, and almost as many gurus offering new-age healing practices, Reiki, womens circles, cacao ceremonies, sound massage, tantra, the list goes on. I dabbled in them all and had phenomenological experiences which serve as testimony to the powerful healing such activities offer.   The two bridges, a few kilometres apart, demarcated the two main zones of this tourist-orientated town. Ram Jhula housed the domestic travellers, Indian residents, coming to Rishikesh to worship, and take selfies on the bridge.  Laxman Jhula was the Western end, backpacker central, peppered with cafes, serving freshly ground coffee and vegan cakes.

Most guesthouses also offer daytime excursions, to mountain top temples for sunrise, or on rubber dinghies down the rushing rapids of the river.  Signs for these added to the plethora of advertising boards that detailed yoga schedules and the odd satsang that enshrouded every doorway and step, turning walls into huge wordsearches, a befuddled smorgasbord of fonts and lettering, an overload of information, resulting in all becoming too much to visually comprehend.    At night, as the wind whistled up the Ganga, the streets became eerily quiet, barely a soul to be seen, cows lying every which way but loose, dogs howling.  Stilted, riverside hang-outs brimmed with dread-headed, charas smoking, spiritual dilettantes, mostly Israeli, talking chakras and where to get Bhang lassi.  These small, wooden structures came alive with the rhythmic, ear-pleasing beats of djembes and deeply resonating vibes from impressively played didgeridoos.   It was hippy paradise, just to sit back and absorb it all, sipping on a hot ginger-honey-lemo, passing the dutchie to the left hand side.  Although the potent snot green sensimilla of the Netherlands was distinctly absent here, if weed is your thing, then it’s the brown bush-weed of nature’s bounty that you will find here.  An amusing little reminder of Brixton, and the ‘mersh’ smoking Rastas that became friends of sorts, occupying the stoop of my nearest William Hill. However, it was charas that featured highly here.  Supposedly the hand-rolled product of Himalaya's finest.  Hash was smoked everywhere, carefully rolled joints, decorated the fingers of many a Caucasian, whereas the chillum was the weapon of choice by those wanting to further aquaint themselves with the habits of the ochre-robed babajis that lined the streets and slept like corpses on unforgiving benches made of cement.

Perpetually honking horns blared ear-piercingly from the jeeps that served as taxis here, rather monstrous vehicles to be hurtling through the broken, crooked, and more worryingly - narrow streets, passing by a hair's breath.  There was no end to the even more annoyingly pitched signals from the scooters that whizzed through gaps as quickly as they opened up between said jeeps and everything else that contributed to the traffic of these roads. The holy cow was the only traffic control here, the only thingrevered highly enough to find another way around.

The jam-packed bridges transformed into the stuff of nightmares during peak times, with wailing motorbike horns, impolitely forcing their way through an already high-congested walkway of people, monkeys and cows.   Not to mention the large groups of Indian families, causing actual road-blocks, stopping to snap whole-family photos of their clan, suspended across the Holy river on the equally holy and auspicious bridge.

Infamous Bridge Selfie! With gargantuan population size in India I guess there is just too many people to wait for a quiet moment, so the approach is to just do whatever you want and not consider the hundreds of people at a stand-still, waiting for you to move on. Brits would be far too abashed and apologetic to even dare try pull this kind of behaviour, I'm sure of it! Pausing, ever so briefly, in the path of a power-walking commuter during London rush hour would likely get you enough admonishment and loathing, never mind hold up the whole of London Bridge!  The scooters and motorbikes crossing these narrow hanging, metal bridges crammed full of people and animals was almost too much. Motorbikes! Some with two, or three, or maybe even four people on them! Bikes which just honk, and honk, and honk, until they reach the other side.  I understood how the horn was used in India, as a signal of one’s presence, rather than an angry retort, but in situations like this, the horn-honking baffled me, where did these two-wheeled riders expect pedestrians to go, to hop over into the depths of the Ganga, or perhaps join the macaques, balanced high up on the steel wires of the bridge? Riders were literally rubbing shoulders with the pedestrians, the honking of the horn was ludicrous, a whisper would even suffice in this state of affairs!

It was a crazy place.  Like nothing I’d experienced. A high-vibrational, multi-dimensional nirvana, blended with the chaos and noise that was India’s most noticeable trait.  Chaos. Beautiful, unpredictable chaos.

Meditations by the river were powerful, eyes close, plug in, blast off. I had physically moving experiences here, full body convulsions, waves of vibrating energy, Kundalini rising, strange computer-like voices, flashbacks into previously visited dimensions, under the veil of DMT. It. Was. Deep. I’ve never felt such a strong connection, and three months spent here, left me feeling like a completely different person from that girl in London, just a few months before.  It wasn’t all plain-sailing, with a few existential conundrums, not unlike Arya Stark, becoming ‘no-one’, an answer that often came to my mind when asked my name.  Shedding all this baggage of the matrix style rat-race that is London life left me feeling a bit lost and confused, no longer having any real ambitions or desires, other than just to be, to exist here in this holy town. And this was fine. For now, I’ll just float along, like the river, fully surrendering into the hands of the Gods. 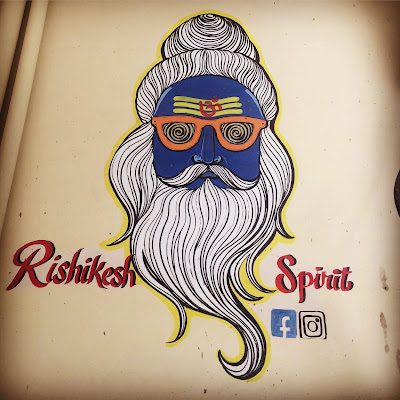 Three months on, as I sit in a café in South Goa, I have the liberty of further insight into this existential unravelling that Rishikesh instigates. That sacred place up there in the mountains, sitting on some powerful laylines, a portal of some kind, is powerful. The effect it has is one of removing all the layers to one’s identity that have been created, mostly externally, through society, conditioning, programming, life.  All the ‘stuff’ that makes us who we ‘think’ we are. All the rubbish. The energy of Rishikesh peels this all away. And what lies beneath is pure being. Who we truly are. Just cosmic energy, from the source. This feeling of no-one, as scary as it felt at times; this feeling of lack of ambition, lack of desire, loss of interest in all the stuff that had at other times seemed so important, was just the melting away of the unreal. To experience that feeling of being no-one, nothingness, just being, was something I will cherish forever. Over the following weeks, as I travelled through Rajasthan, I felt the connection weaken, and by the time I got to Goa, my sense of Self began to return. ‘Oh yeh, this is who I am’. However this time, one can really pick up just the pieces that are important, what one really wants to be. I feel more grounded, more confident, more laid back, more free.  I have less worries and anxieties, less pressure to achieve, less stress to make things work.  I carry great happiness and gratitude in my heart to have had this experience that gave me a deeper insight into what existence could really be. And I’ve realised why Rishikesh is such an important pilgrimage site.  It is certainly no place for permanent residence. Rather, it is a haven, to return to, whenever one needs; a reminder that we really are no-one, and most of what we think we are, we are not.  In the words of Morpheus to Neo ‘Don’t think you are, know you are’ – and with this, know that you are no-one ;)
3 views